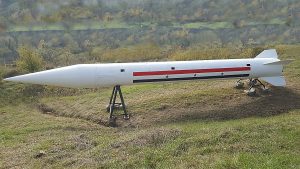 SS1 Scud missiles are a series of tactical ballistic missiles developed by the Soviet Union during the Cold War. The first one of the series to be developed is the SCUD-A, in 1957, weighted 4,400 kg. The second one spawned by the URSS in 1965 was the SCUD-B: it weighted 6,370 kg. The Scud-B was carried on a tracked transporter erector launcher called MAZ-543.

In 1970 was launched the SCUD-C: It presented a higher range (500–600 km), but also a greatly reduced accuracy and warhead size compared to its predecessor.

In 1979, the URSS owned more than 520 SCUDs (either B or C type). The SCUDs’ wareheads could be chemical, nuclear or high explosive.

The SCUD-B missile has been mostly used by the countries of the Warsaw Pact, Iraq and Egypt.

At the end of the 80’s Museo dell’Aviazione was able to buy one used by Iraq, that was sent to URSS for maintenance but was not returned to Iraq due to international conflicts.