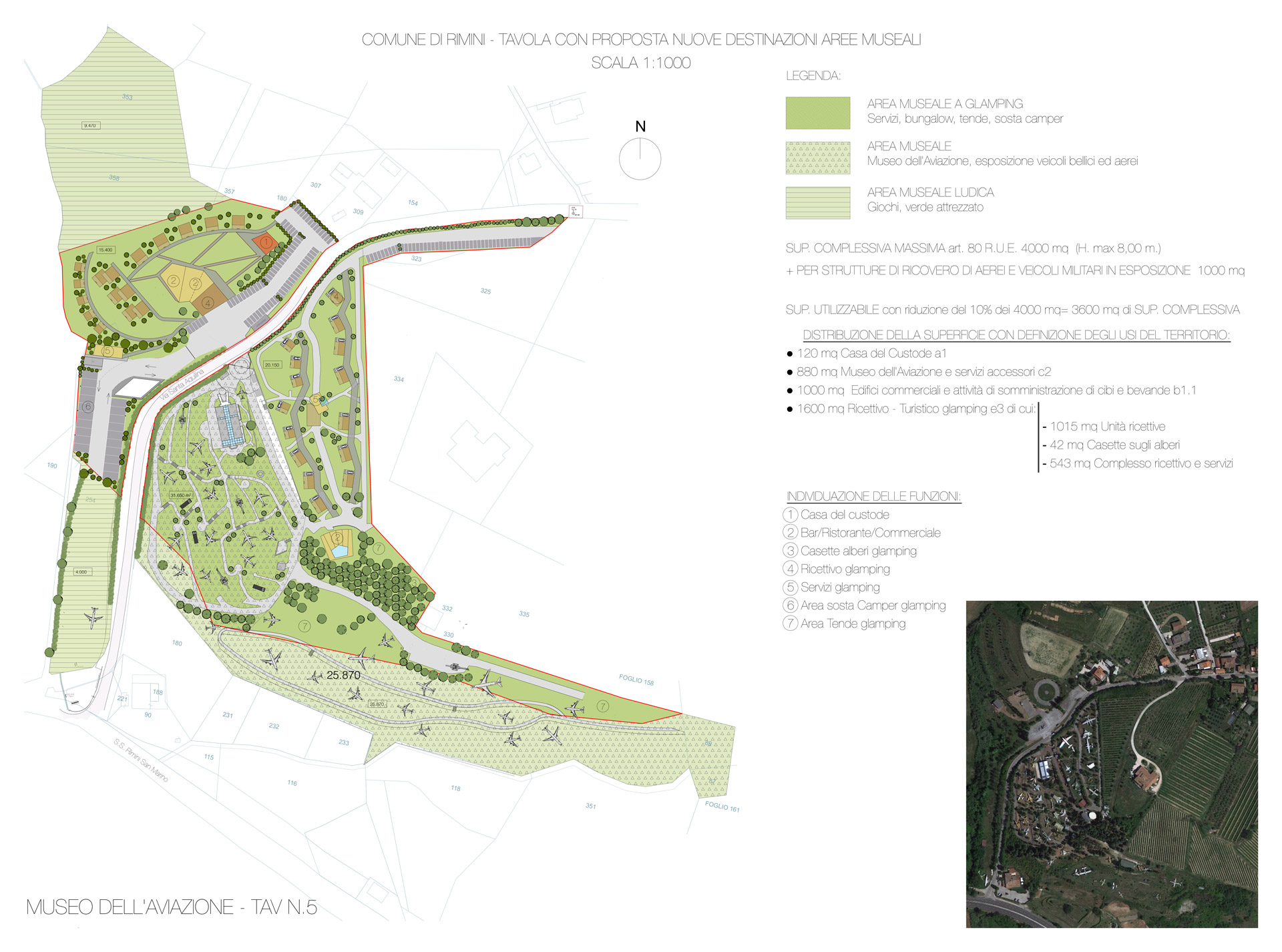 After careful and in-depth evaluations that came from a beneficial debate between the Municipal Administration and the Mayor of the city of Rimini Dr. Andrea Gnassi, the owner has decided to launch a renewed global proposal to promote the construction on the aforementioned land of an architectural project based on the “Glamping” model. From the first studies of the preliminary project, architectural solutions signed by Antonello Mambelli Studio all in line with the surrounding natural environment, were found.

Among the solutions envisaged are: a new central body of 1000 square meters in which the accommodation sector will be integrated, the main visitors services, the wellness area, the restaurant and commercial bar and various areas for classrooms and/or meetings and seminars; the planning of new “Bungalows” designed for a capacity of 2 to 6 people, equipped with a porch, parking space and Jacuzzi for 1600 square meters; the renovation/expansion or recon- struction of the other existing buildings, such as the ticket office, the restaurant/bar in the grove, the Francesco Ba- racca pavilion and the reception annex for another 1000 square meters including the existing pavilion used as a mu- seum. In order to achieve a more balanced partnership between innovation and respect for the surrounding natural environment, cutting-edge materials characterised by a high degree of eco-friendly compatibility will be used, in continuity with the respect for the surrounding naturalistic context that has been a must since its foundation and has become the identity of this Theme Park.

Part of the same project will also involve a camper area, with all the necessary services, to be built near the large main car park, in front of the current entrance to the Aviation Theme Park and which will extend up to the dual car- riage way for RSM in addition to the square meters allowed for by the variant. In addition, to allow guests to enter the Bungalows, which will be erected on the highest part of the current terraces of the Park, a new access will be opened along Via Sant’Aquilina, with relative parking. More so, airplanes and armoured vehicles displayed outdoors

to be viewed and enjoyed by visitors will be equipped with suitable and modern covers for a an area of up to 1000 square meters.

The Museum of Aviation is immersed in an extraordinary landscape with incredible hiking opportunities to historical scenarios such as San Marino, Verucchio, San Leo, etc., accessible through paths to be taken both by road bike and mountain bike.
At the same time, it is within a geographical area, between the coast and the territories of the Conca Valley, with its strong appeal to Italian and foreign enthusiasts of food and wine.

Bear in mind that in the immediate vicinity just a few hundred meters away from the Museum there is the new Polo della Moda San Marino Outlet Experience (http: /www.sanmarinooutlet.com) which will initially develop over an area of 25,000 square meters, (the first part). A centre dedicated to fashion that will attract about 2/3,000,000 visitors a year who will have to drive not only over the Rimini-RSM dual carriageway but also along the Via Santa Aquilina which crosses the “Museum of Aviation’ on the two sides where the whole new tourist complex will soar.

For these reasons, one can certainly speak of the Aviation Theme Park as an attractive pole of extraordinary impor- tance.